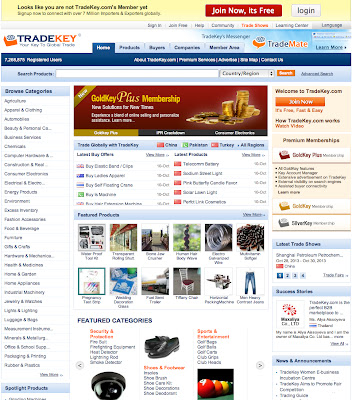 In a strongly-worded decision issued by a California federal district court judge this week, the owners of TradeKey.com were found liable for contributory counterfeiting and placed under a permanent injunction.

TradeKey is a multinational company with offices in Saudi Arabia, China and Pakistan, which claims to be one of the largest and fastest growing online business-to-business (B2B) marketplace that connects small and medium businesses across the globe for international trade.

For an annual fee of $519, wholesale sellers and distributors can set up customized accounts on TradeKey, offering thousands of items for sale to businesses in bulk quantities.  TradeKey also solicits its wholesale buyers and distributors worldwide to become "premium" members, which costs $3,000 annually.

TradeKey had garnered something of a reputation for being a retail counterfeiters' supermarket.

When the undercover investigators (posing as wholesale distributors) asked TradeKey's sales representative if there was any problem with selling counterfeit luxury goods on the TradeKey website, the sales representative replied that it was "not a problem," and further said that "as far as the replica industry is concerned it's one of the businesses that we rely on to get us a whole lot revenue."

The investigators also were able to purchase numerous counterfeit goods from a variety of sellers on TradeKey.

Richemont filed suit in Los Angeles federal court against the individual sellers (who defaulted by not defending themselves), but also against TradeKey and its various corporate owners, alleging that they were contributorily liable for counterfeiting.

Essentially, Richemont's lawyers alleged that, by knowingly aiding and abetting the sale of counterfeit goods and receiving a direct financial gain from doing so, TradeKey's owners should be held liable for the sellers' conduct.  Richemont moved for summary judgment against TradeKey and won.

Notably, based on the written decision, it is clear that TradeKey's legal defense was an unmitigated disaster.

TradeKey's lawyers first tried to argue that the undercover investigation was "sloppy" and not credible, suggesting that technical defects in chain of custody forms injured the investigators' credibility.

The Court roundly rejected this criticism, finding that the goods that where purchased were clearly counterfeit and the results of the investigation was very persuasive.

Further, TradeKey alternatively tried to argue that the sales representative "clearly misunderstood the term replica."  The Court found this argument wholly unpersuasive, as it was "undermined by the plain language of his [own] statements, their context" and the fact that the investigators posted multiple listings for counterfeit goods using the term "replica," all with TradeKey's clear knowledge.

TradeKey also even tried to argue that counterfeit products don't cause any consumer confusion, because those consumers purchasing the spurious goods in bulk essentially knew the goods were fake.

Consequently, TradeKey was found legally responsible for the conduct of its counterfeit sellers, and a Court order was entered that permanently prohibits any seller on the site to sell goods bearing the Plaintiffs' counterfeit trademarks.

What lessons can be learned from this important decision?

Second, conducting a thorough undercover investigation before filing litigation is the paramount way to gather evidence.

Third, as a matter of legal strategy, if you are a lawyer defending a client with a difficult factual record, pick your best single legal argument and stick with it.

Attacking the credibility of reputable undercover investigators and simultaneously trying to claim that your client didn't know what the word "replica" means, is not likely to sustain your credibility with the Court, especially when combined with obviously silly arguments such "the sale of counterfeit goods doesn't cause consumer confusion."

Such a tactic will likely anger most judges and won't give you a very strong appellate record if you lose.
Posted by Unknown at 11:06 AM No comments: